Every few years, we get a really snowy winter.   This is one of them.  Last winter we had nothing.  Zip.  We just had our third round of snow the other day, and miracle of miracles... the Significant Other was home to enjoy it.

Guess who did zero shoveling or snow blowing...  You got it.  I made soup instead.  Believe me, I've earned sitting it out for awhile.

On top of the two feet we already had, we got another 8-10 inches.  Ivy seems to be dealing with it a bit better.  She loves to play in it, but she's been stressing out about where to go to the bathroom.  I'm not sure why, but dogs seem to have this thing about having to pee and poop in certain places, and the snow seems to have thrown off all her boundaries.  But like I said, she seems to be dealing with it now.

The good thing is that playing in the snow makes her tired.  Having a young dog is kind of like having a toddler... sometimes you just want them to nap. 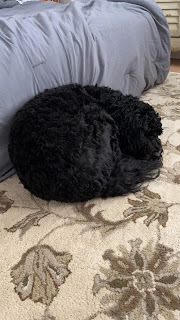 Of course there's also a downside...

We have to remember to wear slippers or else everyone has wet socks for awhile.
A bunch of my friends and I were talking the other day about the Blizzard of '78, and lo and behold, I came across this picture.  It was February of 1978, and I was in 7th grade.  The snow started on a Sunday and didn't stop until Tuesday.  We lost power for a few days, but some people in our town lost it for two weeks.  I think we wound up with over two feet of snow.  After the plows piled up all the snow on the sides of the roads, it was perfect igloo building snow.
I remember bringing all sorts of things in there - my tape recorder, books and such.  It was a fun place to hang out.  I did miss TV though.  I was quite a TV junkie back in the day.
I took a few pics during yesterday's storm.  I would have removed the window screen for better shots, but I would have wound up with even more snow in the house than the dog brings in.
Once the storm passed, which was somewhere around 4pm, the blue skies came, and everything brightened up. Today is much of the same.  It's cold, but it's bright and sunny.  There's even a cardinal singing right now. 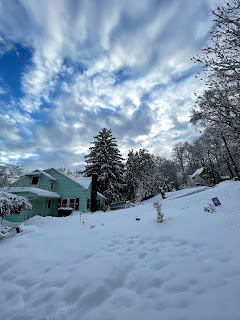 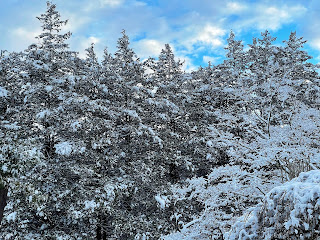 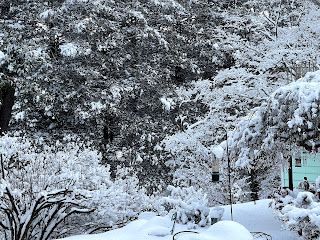 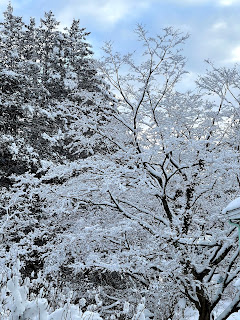 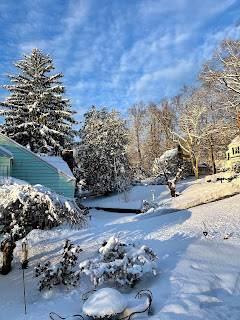 Right now I'm enjoying it.  I'm not thinking about the mess it will become when it starts to melt. 😨

Blogs I read. Check them out.